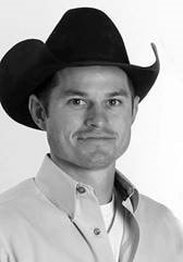 ​
When Jet McCoy was 5 years old, he sat on his first saddle and began to develop a passion for something that has evolved into a great part of who he is today. He believes in hard work and is thankful for God and his upbringing instilling that in him even at a young age.
Jet was born and raised in southeastern Oklahoma and is proud to call Oklahoma home because of the people. They believe in helping one another even when it’s not convenient for them to do so.
McCoy competed on the Southwestern Oklahoma State University college rodeo team from 1999 to 2001 in bull riding and bareback riding ranking so high in his divisions that he was awarded athlete of the year in 2001 and inducted into the SWOSU Hall of Fame in 2017.
After graduating Southwestern Oklahoma State University with a degree in communications and psychology, he has had a diverse work experience over the past 15 years that he believes has equipped him to be both a natural and effective leader.
Jet and his brother Cord completed three seasons on the reality TV show “The Amazing Race” competing against other teams in a race around the world coming in at a close 2nd for the million dollar prize.
McCoy has worked as a pumper and land man for some leading oil and gas production companies and served as a field representative assisting in trading commodities - all while he and Ashlee are growing their ranching operation near Ada, Oklahoma. In other words, he understands the importance of trade, energy, commerce and enterprise. The free enterprise system is the fairest economic system in the history of the world.
Jet and his wife Ashlee have one daughter, Ti Silver.
RETURN TO SPEAKERS
Website Developed by The Guild